Conditions deteriorate for civilians amid fighting in north-eastern Syria

This article originally appeared on UNHCR’s website. Reposted with permission.

This is a summary of what was said by UNHCR spokesperson Andrej Mahecic – to whom quoted text may be attributed – at today’s press briefing at the Palais des Nations in Geneva. 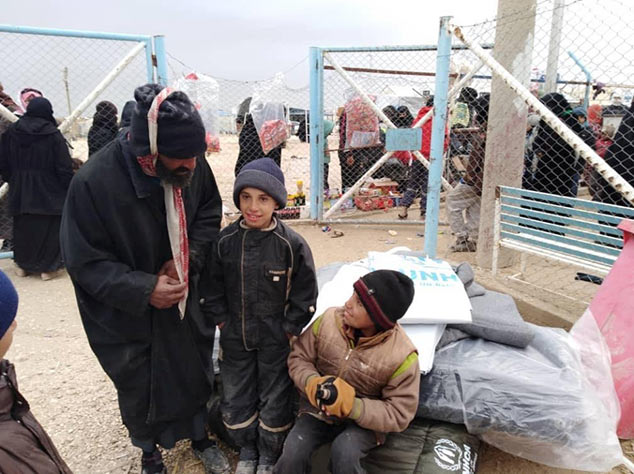 UNHCR, the UN Refugee Agency, is increasingly worried for the safety of civilians trapped in ISIL-held areas of Hajin enclave in Deir ez-Zor governorate in northeast Syria. We are also concerned for the situation for civilians who have managed to escape the armed conflict. UNHCR and other humanitarian partners are racing to meet the urgent needs of vulnerable civilians who have arrived at the Al Hol camp in Hassakeh. We are supporting them with immediate shelter, and relief items.

Those fleeing speak of fierce fighting and a heavy toll on civilians with casualties widespread. Food and medical supplies are hard to come by. Civilian infrastructure has been damaged or destroyed. Families who managed to escape the fighting say that ISIL is preventing other civilians from leaving the area.

UNHCR reiterates once again its call to all parties to the conflict, and those with influence over them, to take all possible action to ensure that civilians and infrastructure are protected in line with International Humanitarian and Human Rights Law. Safe passage for civilians is critically important and must be ensured.

Families fleeing the Hajin enclave and surrounding areas have also told us of a harrowing journey to safety. They travel at night with barely any belongings, often having to wade through mine fields and open fighting. On reaching positions of the Syrian Democratic Forces (SDF), they describe being herded into open trucks and having to endure another arduous journey in winter weather northwards to Al Hol camp. Little or no assistance is provided en route to the hungry and cold people, the vast majority of whom are women and children. Since early December at least 29 young children and new-borns died while on their journey or shortly after their arrival.  Malnourishment and hypothermia have been the principal causes of death. Medical facilities in Hassakeh town, where the most critical cases are referred to from the camp, are overstretched caring for acutely malnourished children.

Humanitarian actors have collectively requested forces in control of the area to designate a transit site en route for Al-Hol where life-saving assistance can be provided. This initiative remains unimplemented more than two weeks later.

The vast majority of fleeing civilians are Syrians, residents of villages in south Deir-ez-Zor province, have been caught up in the fighting as ISIS retreated south. They are anxious about their confinement to Al-Hol camp and the confiscation of their documents. Most hope to be allowed to join their relatives and friends in Deir-ez-Zor province and return to their homes as soon as the fighting is over.

UNHCR is concerned about the persistent practice of confiscation of identity documents and movement restrictions imposed on residents of internally displaced people (IDPs) and refugee camps in Hassakeh governorate. IDPs fleeing Hajin should be allowed to choose where they stay and should be allowed to return to their homes as soon as they deem it safe.

With the surge in arrivals to Al Hol over the past weeks, reception areas are now overcrowded. UNHCR and partners have set up 24-hour response teams to receive the newly displaced people, quickly identify the most vulnerable cases and provide urgent assistance, especially to unaccompanied or separated children and those who require immediate medical assistance.

A number of other emergency measures have been put in place in Al Hol, particularly in the reception and screening areas of the camp. Additional large tents were set up as immediate shelter for new arrivals. UNHCR, other UN agencies and humanitarian partners also opened child friendly spaces, schools and communal kitchens to temporarily shelter new arrivals. UNHCR with partners have set-up more than 4,500 tents, with 3,600 are ready to be installed. Our teams have assisted the more than 23,000 new arrivals with core relief items and winter assistance.

We reiterate our calls for unhindered humanitarian access. It is vital that our teams are able to deliver life-saving humanitarian assistance, especially during this harsh winter period.